The name of Russia, the great commander Prince Alexander Nevsky was one of the most outstanding people of our Fatherland.

The life and ministry of the prince gained fame as a wise ruler, an outstanding diplomat, an invincible defender of the Fatherland, a worthy family man, a faithful patriot, a defender of the Church, a monk and a saint. All this makes the life of the prince a unique and inspiring example that has earned love and respect, both in Russia and abroad.

Alexander Nevsky was the creator of the multinational and multi-confessional “Russian world” that still exists today. Alexander Yaroslavich Nevsky was born in 1220 in the city of Pereslavl-Zalessky. Descended from the clan of the Vladimir-Suzdal Grand Dukes: the grandson of Vsevolod the Big Nest, the great-grandson of Vladimir Monomakh. The son of the Grand Duke Yaroslav Vsevolodovich was born when his father was a specific Pereyaslavl prince, and later - the Grand Duke of Kiev and Vladimir. The mother of Alexander Nevsky was the Grand Duchess Theodosia. History has kept almost no information about her. Most researchers consider her the granddaughter of the famous Ryazan prince Gleb Vladimirovich, the daughter of prince Mstislav the Bold. Through the "Life" she passes as a quiet and humble princess, who completely devoted herself to her female service - loyalty and obedience to her husband, caring for numerous children. Alexander had an older brother Fedor, as well as younger brothers Andrei, Konstantin, Yaroslav, Athanasius, Daniel, Vasily, Mikhail and sister Maria.
1220 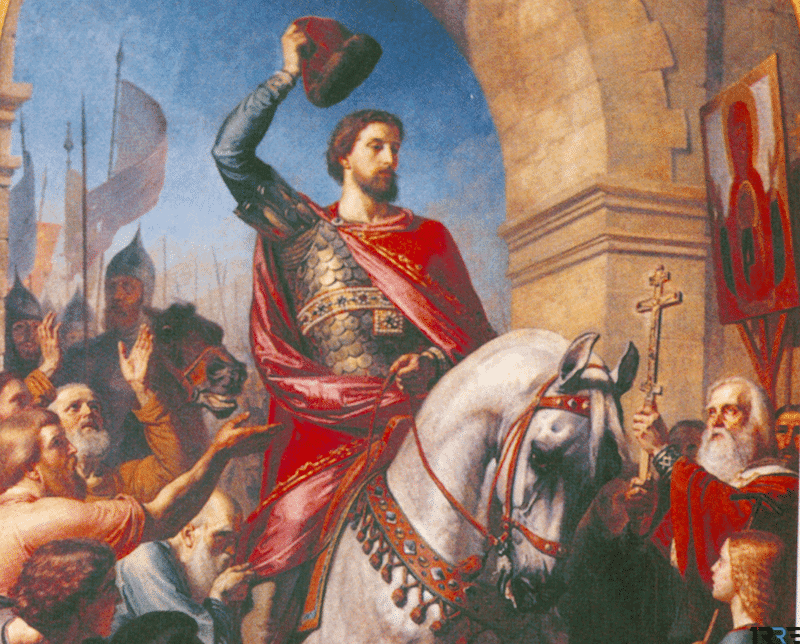 Alexander received an extensive and comprehensive education from early childhood. The mentors of the young prince were persons of clergy. Bishops, priests, monks. The teaching itself was imbued with the truths of Christ's faith, the spirit of Christian piety. At the age of 4, Alexander was tonsured during the war in the Transfiguration Cathedral of Pereslavl-Zalessky by Bishop Simon of Suzdal. Alexander's "reign" took place in 1236, in the church of St. Sophia in Veliky Novgorod. Yaroslav blessed Alexander to reign in Novgorod and told him: “The cross will be your guardian and helper, and your sword will be a thunderstorm! God gave you the eldership among the brothers, and Novgorod the Great - the senior reign throughout the Russian land. "
1236 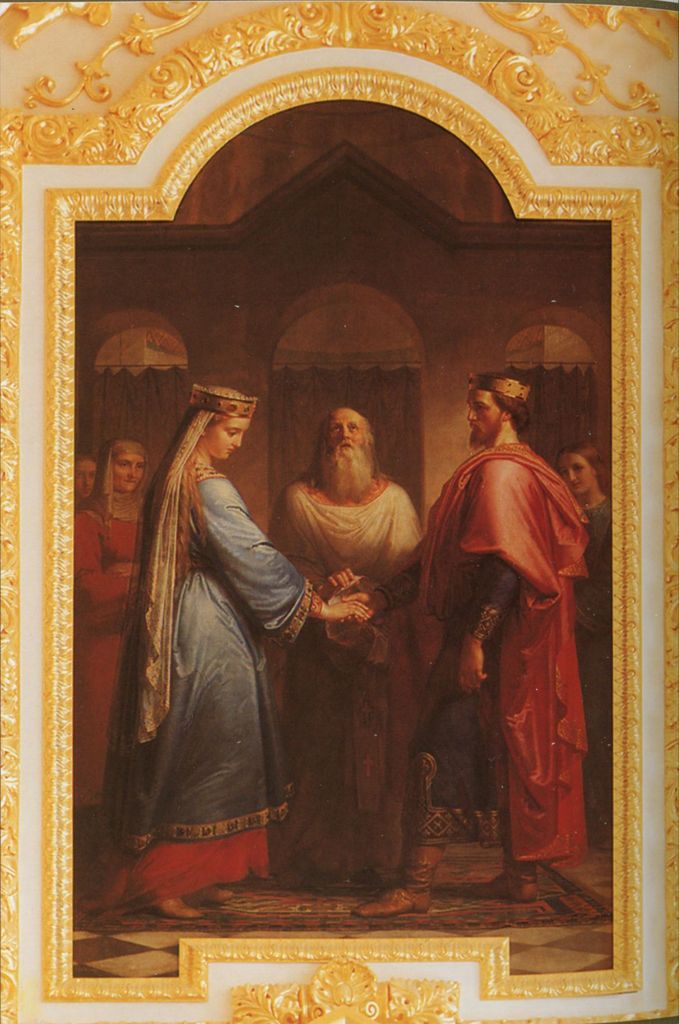 Alexander Nevsky married in 1239, immediately after the victory over the Lithuanians near Smolensk. The wife of the prince was Alexandra, the daughter of Bryachislav of Polotsk. The young were married in the church of St. George in Toropets. The prince's family was large, the princely couple had 6 sons: - Simeon I, Prince of Vladimir; - Infant Daniel the Great I (deceased - 1258), Prince of Vladimir; - Vasily I, Prince of Novgorod (1242-1271); - Dmitry I, Prince of Novgorod (1250-1294), before his death he took the monastic rank (schema), is revered as a locally revered saint; -Andrei III, Prince of Novgorod (1260-1304), lived permanently in Gorodets-on-Volga, where he rested, taking the monastic rank; - Saint Daniel I (1261-1303), Prince of Moscow, died in Moscow, before his death he accepted the schema, canonized among the saints of the Orthodox Church. Also, the princely couple had 2 daughters: - Evdokia I, Grand Duke princess of vladimir; - Elena I, princess of Vladimir. Alexander Nevsky was not only an excellent military leader, but also an excellent family man who honored his beloved until the end of his days. It is possible that one of the reasons for the prince's invincibility in battles is the reliable family rear. He treated his family with care. At a dangerous time, he sent her from troubled Novgorod to Vitebsk.
1239 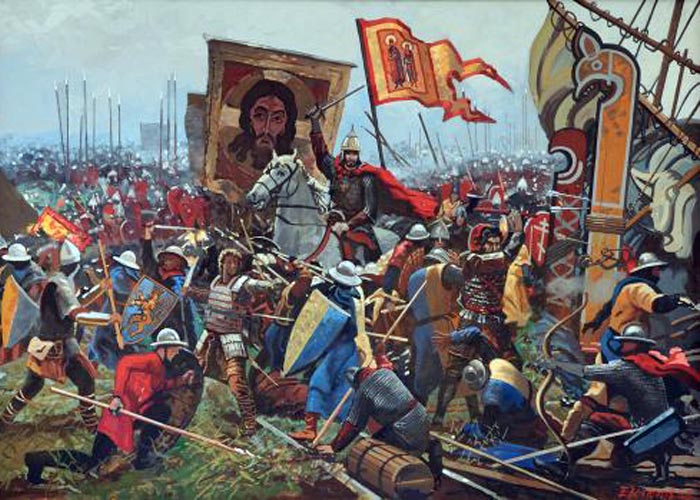 BATTLE ON THE ICE

The German knights-crusaders, who knew the power of the military leader's talent and the authority in Russia of the young Novgorod prince Alexander Yaroslavich, gathered a huge army at that time to defeat the no less formidable Russian army. At the end of August 1240, the crusaders of the Livonian Order invaded the Pskov land. After a short siege, the German knights captured Izborsk. Then the defenders of the Catholic faith besieged Pskov and occupied it with the assistance of the traitorous boyars. This was followed by the invasion of Novgorod land. At the call of Alexander Nevsky, troops from Vladimir and Suzdal arrived to help the Novgorodians under the command of Prince Andrei, brother of the Novgorod ruler. The united Novgorod-Vladimir army undertook a campaign on the Pskov land and, cutting off the roads from Livonia to Pskov, took this city by storm, as well as Izborsk. But the Novgorod boyars were afraid of Alexander's growing influence. Representatives of the nobility, with the help of various tricks and incitements, made the commander go to Vladimir to his father. At this time, the German army made a campaign against Russia, capturing the Pskov, Izborsk, Volga lands, the knights took the city of Koporye. The enemy army came close to Novgorod. Then the Novgorodians themselves began to beg the prince to return. In 1241, Alexander Nevsky arrived in Novgorod, then liberated Pskov, and on April 5, 1242, the famous battle - the Battle of the Ice - took place on Lake Peipsi. The battle took place on a frozen lake. Prince Alexander applied a tactical trick, luring the knights, dressed in heavy armor, onto a thin layer of ice. The Russian cavalry attacking from the flanks completed the defeat of the invaders. After this battle, the knightly order abandoned all recent conquests, and part of Latgale was also ceded to the Novgorodians.
1242 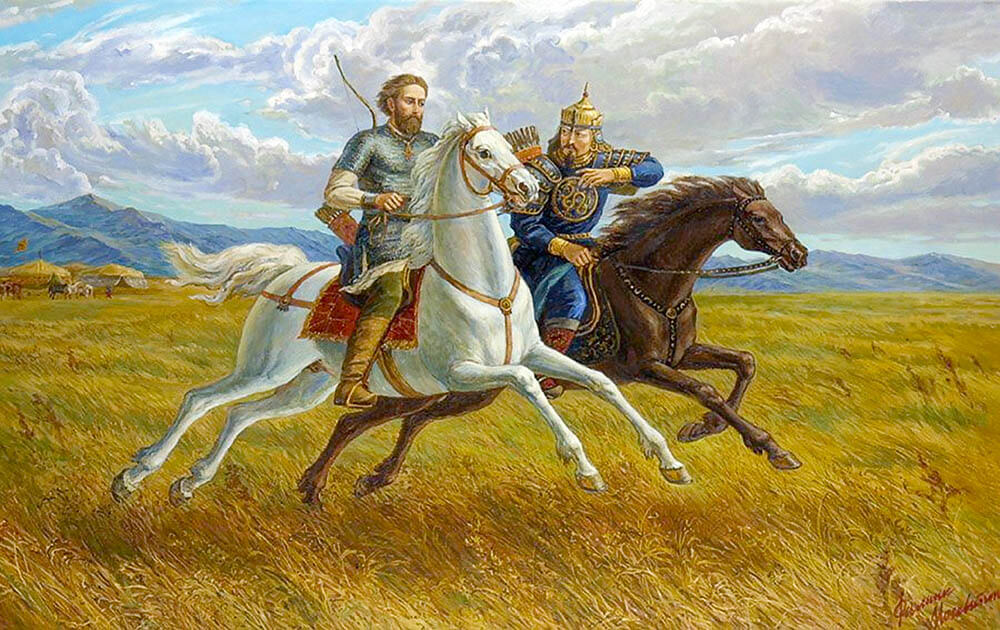 ALEXANDER NEVSKY AND THE GOLDEN HORDE 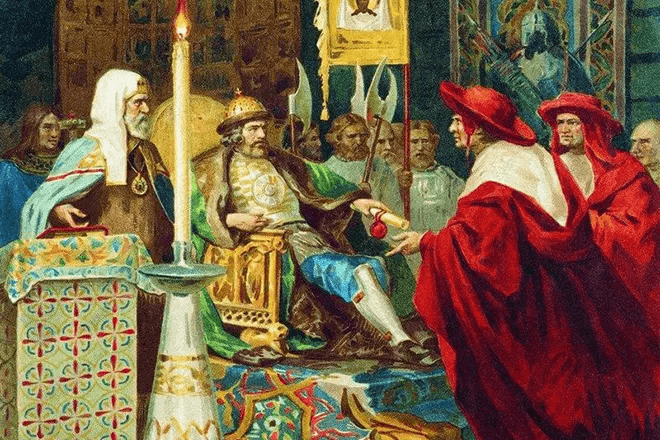 Despite Alexander Nevsky's determined opposition to the Catholic offensive, Pope Innocent IV did not lose hope of subordinating Russia to the Roman throne. At the end of 1252, ambassadors came to Alexander from him - two cardinals, Gald and Gemont, with a rather flattering written message to the Russian Grand Duke. The message said that the land of the Grand Duke is great and rich, and his name is glorified all over the world, and therefore the Pope invites him to get acquainted with the teachings of the Catholic Church. The letter also said that the princes and their subjects in Russia will find peace and glory only under the shadow of the Roman throne. The Pope demanded to build a Catholic church in Pskov for foreign merchants and invite the Bishop of Prussia to visit him. Remaining a staunch adherent of Orthodoxy, Alexander Nevsky answered unequivocally, referring to the teachings of the Seven Ecumenical Councils: "We bring this all together for good, but we do not accept the teaching from you." The Grand Duke's refusal to the pope's envoys strengthened the position of the Nevsky hero in Russia, where the Latins were not loved, where the preservation of the faith of the fathers and grandfathers meant loyalty to the Russian national identity and power based on faith and national unity.
End 1252 While on his last trip to the Horde, Alexander fell ill. In the fall of 1263, the seriously ill prince went home. The way up the Volga was long. With excitement, the prince and his companions entered the Russian borders. But the illness that began in the Horde undermined the strength of his powerful body. Arriving in Nizhny Novgorod, Alexander became so weak that he could not continue traveling and had to stop. Having gone a little, he continued his journey again, but, having reached Gorodets (Volzhsky), he fell so badly that he was not able to go further. Here, in Gorodets, he was met by his brother Andrey, prince of Suzdal, who lived there. Alexander realized that the end of his arduous life was approaching and began to prepare for the transition to eternity. He began to ask for tonsure and the monastic acceptance of the schema with the name Alexei, and this happened in the cell of the Gorodetsky Feodorovsky monastery, where he ended his life on the night of November 14, 1263, having received the Holy Mysteries of Christ.
1263 The veneration of Alexander Nevsky as a saint began long before he was canonized by the Russian Orthodox Church in 1547. The glorification of the Grand Duke Alexander Nevsky began almost from the day of his death (1263). At the very burial of him, when Metropolitan Kirill of Kiev and Vladimir approached his coffin to hand him a letter of permission, the hand of the deceased itself stretched out, as if alive, and accepted the letter. In a miracle with a spiritual literacy, they saw a clear glorification of the holiness of the Nevsky hero. In memory of Alexander Nevsky, a monastery, the Alexander Nevsky Lavra, was built in St. Petersburg, where in 1724 his relics were transported by order of Peter the Great. Peter also decided to commemorate him on August 30, the day of the conclusion of a victorious peace with Sweden. In 1725, Empress Catherine I established the Order of the Holy Blessed Prince Alexander Nevsky, one of the highest awards of the Russian Empire. It existed until 1917 and was the second most important after the Order of the Holy All-Praised Apostle Andrew the First-Called. In the USSR, during the war, in 1942, the Order of Alexander Nevsky was also established, which was awarded to officers of the Red Army for their personal courage and ensuring the successful actions of their units. In 2008, the television project "The Name of Russia" was launched, the main task of which was to choose a historical figure most significant in the history of Russia with the help of a popular vote. According to the results of a large-scale poll of Russians on December 28, 2008, Alexander Nevsky became her.
1547